I use Red Hat Enterprise Linux for my own hosting service and on nearly every server I interact with at my day job. So Fedora, as a spin-off of Red Hat, seemed like a logical choice. I chose Fedora 14, since it's the latest and I've heard good things about it.

Like Mac OS, Fedora comes with a good command line interface in the form of a bash shell and terminal application. It, of course, supports SSH out-of-the-box as well as X forwarding for remote X sessions and applications. Under Mac OS, I could emulate the middle-click "paste selection" function in Terminal with [command]-[shift]-v, which was great for pasting output from the terminal into my next sets of commands. Fedora seems to actually require a middle click or some futzing with the keyboard mapping to make one. I haven't dug into it too far, since my laptop keyboard includes a middle-click button next to the trackpad. It's a little annoying to reach over and hit the button but...it works.

Like Windows, X has problems with multiple monitors. On my Mac, I can plug in a monitor and it will turn on and become either a mirror or an extension of my desktop. The Displays preference pane controls which one and what arrangement they are in. If I connect a projector, months later it will remember how I set up that projector and will use the same configuration. Fedora...well...you have to log out and log back in to restart the X window server and allow the new monitor to be recognized by the system. The nVIDIA driver improves the situation a little bit, but not much. With nVIDIA, you don't have to log out and back in, but you might as well.

Strange things seem to happen with the Gnome desktop under Fedora. There's a fast user switcher menu in the upper right corner, next to the clock and calendar menu. Within a day of installing Fedora, all those menus had disappeared. This is apparently a known bug that nobody has bothered to fix. The way to keep it from happening is to disable Compiz, which makes the windows render more slowly. So you have a choice: a fast interface or a broken one.

I find myself using the Mac OS Dashboard for little things like checking CPU use, using the calculator, checking the battery on my wireless keyboard, and looking at the weather forecast. I didn't get much time to play with the Windows 7 sidebar, but in Fedora, I miss having a readily available calculator rather than a calculator application. I also miss having a weather report that shows more than just today. I usually have a terminal open, so I can use htop to see CPU usage or awk to do calculations, but it's not as convenient as the dashboard.

I've been told that Fedora handles software updates extremely well. I've found that to be mostly the case, though it's clearly far better than Windows. I don't think a single day has passed where I have not had at least one package to update. There's two ways to look at that I guess: either Fedora is really on top of fixing stuff or there's a lot of stuff to fix and it's really annoying to have to do it every single day. It's not a huge deal; usually I just run the updater 1, take whatever it gives me and go about my day as usual. Sometimes there's a second set of packages that has to update after the first (usually selinux-related) package. Sometimes it tells me I need to log out and back in to preserve system security and I go about my day as usual. Once I got this message though: 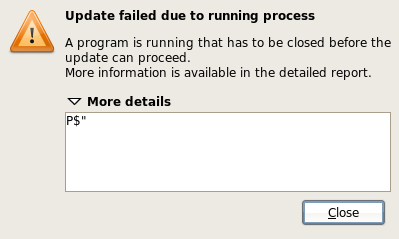 What's up with that? There's no useful information in that message. I even quit everything that was running and tried it again and got the same message. It only worked right after logging in after a fresh reboot.

I miss Apple's Mail(.app). It orders message threads intuitively. It figures out what messages with different subjects should be part of the same thread. It lets me instantly expand or collapse message threads from anywhere in the thread. It lets me instantly see what I typed as a reply to someone's email. It has an unread message count in it's dock icon. Thunderbird has none of these. Thunderbird adds space to subjects in threads until the subject disappears from my message list. Thunderbird makes me want to switch to using the Gmail web client.

The flash plug-in for Firefox has problems. Since I don't have iTunes on Fedora, I've tried some alternate methods of getting music to come out of my computer. Rythmbox works okay but obviously won't play any of my DRM protected music. So I've tried last.fm and other flash-based services and they, along with vimeo and youtube, all have the same problem. Flash will play fine if I don't do anything else (I use hulu to watch TV while riding my bike on a trainer stand with no problems) but if I open a new tab or switch between tabs in that browser window, it just changes to blankness and silence.

Tweetdeck crashes every other time I open it. It's a third-party application, so it's probably not the fault of Fedora or Linux, but it's a great example of the poor support companies give to this category of OS. It seems to happen whenever I'm opening more than one application at the same time more often than when I'm opening only one application. Maybe that's a sign of poor multitasking control under Linux or Gnome?

And my one, final complaint from the last month or so of using Fedora is: The Gnome Terminal seems to miss the obvious fact that, when I click on an active tab, I probably want to type in it. I can't count the number of times I've clicked a tab, started typing, sworn, clicked in the window, and re-typed whatever I just typed. Seems like a no-brainer to me, but maybe someone had a really good reason for doing it. I have yet to figure out the exact circumstances under which it happens and cannot repeat the problem on-demand.

1: Just now I was typing this and running the updater in the background. When it finished it popped a window in front of this one that took focus. Since I was typing I have no idea what it said because it was dismissed when I hit 'delete' or 'enter' or some other key. I hope I didn't break anything.