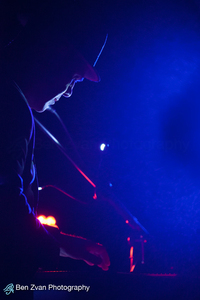 I took some pictures of Thomas Dolby at The Cedar last night. Steph wrote a review.

UN Women Ad Campaign Shows How The World Feels About Women
By Ben Zvan
On October 22, 2013 at 08:50
Politics

An excellent ad campaign. Check it out. 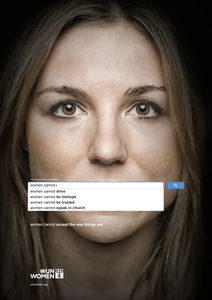 While getting ready for work this morning, I read this on twitter:

Searching for an article with "atheists need to" Google responds with "shut up", "die", and "chill". The hate still catches me off guard. 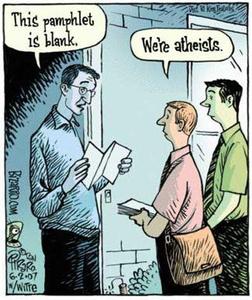 So I thought I'd try some autocompletes. The results were interesting.

I guess buddhists and agnostics don't need anything:
buddhists need to
agnostics need to

So what about "atheists are?"

So we made it to Mars again and geeks like me everywhere stayed up extra late to watch the live event. We were not dissappointed. To see the first photos come back seconds after langing, even though the dust cap was still on the camera was an amazing thing.

Here's what really gets me though. When Curiosity touched down after the sky-crane manouver, I was struck by just how excited the people at JPL were about this. My first thought: "Holy crap! It's like the opening of a Microsoft store ... except they're all wearing the same color shirt."

It's been 50 years since we first put humans on the moon. In 50 years, airplanes went from a tentative unpowered glider in North Carolina to the supersonic Bell X-1; why haven't we done the same for space flight? I mean...should we be this excited by going to Mars? Shouldn't it be old hat by now?

Don't get me wrong. I'm excited. The science that's going to come out of this mission will enrich our lives for years to come and the new technology that went into creating the mission is probably just hitting our cellphones and clothing stores. I just think we're missing out on a lot of opportunty. Heck, we spent the entire budget of this mission in less than a month in Iraq...Just think what we could be doing with more balanced priorities.

I just wanted a place to keep handy links to debunk common misconceptions. 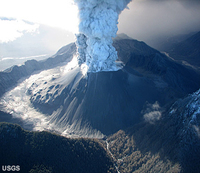 Turns out the USGS has an artice on that one here.

Gas studies at volcanoes worldwide have helped volcanologists tally up a global volcanic CO2 budget in the same way that nations around the globe have cooperated to determine how much CO2 is released by human activity through the burning of fossil fuels. Our studies show that globally, volcanoes on land and under the sea release a total of about 200 million tonnes of CO2 annually.

This seems like a huge amount of CO2, but a visit to the U.S. Department of Energy's Carbon Dioxide Information Analysis Center (CDIAC) website (http://cdiac.ornl.gov/) helps anyone armed with a handheld calculator and a high school chemistry text put the volcanic CO2 tally into perspective. Because while 200 million tonnes of CO2 is large, the global fossil fuel CO2 emissions for 2003 tipped the scales at 26.8 billion tonnes. Thus, not only does volcanic CO2 not dwarf that of human activity, it actually comprises less than 1 percent of that value.

Turns out there's some promise in human embrionic stem cells. You can even start new lines without destroying the fetus (which was probably going to be destroyed anyway.) RPE therapy. 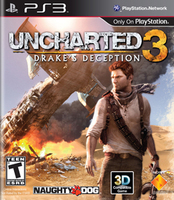 So...I finally finished Uncharted 3: Drake's Deception last night. Overall, I'd have to say it's a worthwhile game, but it has some severe issues.

Story: B+
The storyline of Uncharted 3 follows a wandering path across the globe to discover secrets of imense wealth and power hidden a long, long time ago. This is a familiar story for anyone who has played Tomb Raider or the other Uncharted games. It works, it's fun, and it doesn't have to be too closely interwoven with the gameplay, so it's easy to implement. In this case, it tied in well enough with the puzzles that you could almost believe the storyline and gameplay were developed with some collaboration.

Nearly every chapter had me wondering what crazy plot point would come out next and I mostly cared about the characters and what happened to them. Unfortunately, the plot is often driven by stupidity. It's not as bad as Tomb Raider's Angel of Darkness episode which could have been entirely avoided in the first minutes of the game, but I couldn't help thinking a few times during the game that 'that was a dumb thing to do.'

Art: A+
Creatively, this is a beautiful game. The color palates are well-conceived and appropriate, often bold. The environments are immersive and give a real sense of being there. The architecture is as detailed as any I've seen in a game this year, interrupted only by bright yellow 'hang or climb on this' objects. The character modeling is impeccable and just in the right spot to avoid too much of the Uncanny Valley.

There's one environment (you'll know it when you see it...lots of water) that just blew me away when it was revealed. I've seen other game levels with similar concepts, but this one was just amazing. I felt like I should be able to find it on Google Earth.

Gameplay: C-
The actual game is where this title falls on it's face. The climbing puzzles are great. The environmental puzzles are great. The ability to shoot a gun while hanging from the side of a building is quite handy. The fight animations are nearly on par with Batman: Arkham City in their creativity and satisfying takedowns. The problem comes with the controls.

Drake has a clumsy walk, as he pretty much always has, which surprises me for a motion-captured animation. Was their actor hit by a truck before they did that one? His tendency to touch walls and pillars as he passes them is endearing at first but then made me think he was drunk, and by the end of the game I thought he was Adrian Monk's long lost twin. I can't count the number of times I died because I dive-rolled off a ledge instead of hanging from it (same button). Or dive-rolled past a wall instead of taking cover behind it (same button). Or hung off a ledge instead of taking cover behind a wall (get the picture yet?)

You like those fight animations? Like smashing your opponent into a wall and taking his gun? Get ready for timed button mashing with little blinking triangle, circle, and square icons on the screen. I hated this mechanism when it was introduced and I hate it still today. Sometimes it's done well, but it's still annoying no matter how well it's done.

And on top of all that, there was the overarching problem that once I broke my cover, I was stuck in an epic gunfight with no way to go back and try being stealthy again. The stealth kills were great, but I almost never got to use them because I'd slip up at some point and hundreds of gun-wielding thugs would run into the room. Not to mention that for a thief and explorer, Nathan Drake has an epic body count.

Verdict: Buy it, but don't rush. Used is soon enough. 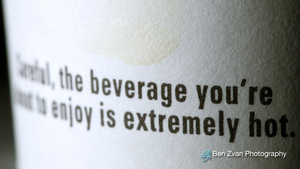 I don't gamble, but I do play poker. In fact, it turns out I'm pretty good at poker despite still having to sit and calculate the odds sometimes. One thing that playing poker has helped me learn is that people do stupid things to get ahead. Consequently, there are stupid rules to keep them from doing it.

For example, if a player puts in only one chip and that chip is worth more than the current bet, unless they announce that they are raising that chip is considered a call and they are owed change from the pot. This keeps the player from getting information from other players' reactions prior to deciding if they will call or raise.

Lewis Black has a similar rant on the topic:

They needed to do this because as the Jews were wandering around willy-nilly in the desert, one of them no doubt led a camel up to a rabbi and said, "I met her at an oasis and it's been wonderful. She looked at me in a way that I've always wanted to be looked at. We're in love and, well, Rabbi, we want to be married."

And the rabbi said, "Perhaps you didn't notice, but she's a fucking camel." Then he went back to the other rabbis and informed them, "Son of a bitch, we have to come up with another rule! Today a guy came back with a camel and yesterday one of them showed up with a snapping turtle. God knows what's going to happen tomorrow. We've got to get these people on track." Hence, the man-woman marriage rule in the Bible.

So when you complain that a law is stupid, realize that it's because someone did something stupid to cause it to become a law. When McDonalds started labeling their coffee as 'hot' because of a 'frivolous lawsuit,' realize that the person who brought that lawsuit suffered 3rd degree burns from 'hot' coffee. When you think that helmet laws infringe on your right to let your hair blow in the wind on your motorcycle, realize that it frees others from the trauma of killing you in the event of an accident.

Not that there isn't such a thing as a truly stupid law. 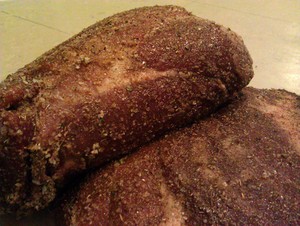 This weekend was a surprisingly successful deer hunting trip to the great brown north of Minnesota. After sitting for the morning on opening day, I was not expecting to see any deer all weekend. I was pleasantly proven wrong when two fawns walked into sight and hung out long enough to be gutted and dragged out of the woods.

In years past, we've spend the week after deer opener processing meat and freezing it for long-term storage. This has always included removing all the fat and as much of the silver skin as possible prior to freezing. This year, we decided to try timeshifting some of that processing by freezing large pieces of less-processed meat that we'll finish processing when we thaw it out to cook. We're hoping that what this lacks in convenience later will be made up with a lack of frustration now.

I also decided to try another project. I heard about Mocetta last winter from JCC at You Have To Cook It Right. He used the recipe from Hank Shaw at Hunter Angler Gardner Cook after he roasted a whole goat for Frustrated Farmer Rick's fall farm festival at Caerwyn Farm and Spirits. The original Mocetta is a Northern Italian, cured, spiced, air-dried goat leg. Now...I don't have any goats, but I figured that venison leg would be a reasonable substitution.

After cutting up two of the hind legs for roasts and the front legs for burger and sausage (I'm going to try another of Hank's Recipes there) I set aside two of the legs, hopped on my motorcycles and headed over to Penzey's Spices to get some juniper berries. Making the rub was simple enough; Hank's recipe made exactly 1 pound, so splitting it up into two parts was simple. After half an hour of preparation, the hams are sitting in a plastic tub in the refrigerator and I'm waiting not very patiently for the first two weeks to pass and the second application of rub.

I still have some kinks to work out as far as where to hang it when the time comes, but this is an old meat product and I'm sure it, like beer, has been prepared under a wider variety of conditions than I can imagine. Only 6 months to go...