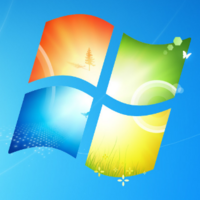 Windows 7: This machine came to me loaded with the approved set-up of Windows 7. Our desktop support folks did a fine job of installing the OS, binding it to the domain, and giving me a local administrator account so that I could actually do my work. I told myself and others that I was going to give Windows 7 a chance. I said I'd try it out for a week and see what happened. That lasted about two hours.

My first problem was that I use SSH connections to servers to do the vast majority of my work. Windows 7 does not have a built-in SSH client. Windows 7 is stuck in the stone age with a built-in telnet client instead. Luckily, there are several options for third-party solutions to this flaw. Putty is the approved software package for SSH connections on Windows and was available for me to install through "Advertised Programs" so I didn't even need to escalate my local permissions to do it. Putty uses the same text interface as the Windows command line. That is to say, it's stuck in the stone age without the ability to effectively copy and paste text. Sure, the option is there, but it's not as simple as point-and-click.

My second problem was that I use X forwarding over my SSH connections to monitor server activity using tools like jconsole. At the moment we're doing a lot of load testing on one of our major applications, so it's pretty important that I be able to monitor performance during these tests. Putty does not support X forwarding. Neither does Tectia, the other, somewhat-approved ssh solution (not free). At this point I started to venture into less approved methods and installed Cygwin as a virtual Unix-like environment in order to get the built-in X support it has. Unfortunately, the approved Windows 7 installation is so locked down for security that X forwarding requires OS acrobatics that are not worth the time.

I hadn't even gotten to the point of plugging in an external monitor and dealing with the tribulation that involves. I did notice that there was an icon on the desktop for "connect projector" and thought "there's an app for that?" The Aero window effects were cute, but they did sort of obscure the title of the windows. I couldn't find anything equivalent to Mac OS's Expose, but I didn't look too hard. I guess [alt]-[tab] is supposed to be better in Windows 7 and show you the windows or something? Fundamentally, the first two problems alone required enough un-official changes to my machine that I just decided to install Fedora 14.