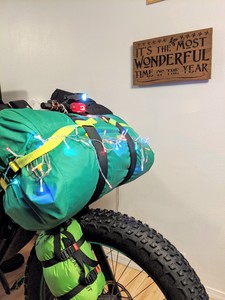 After the Tuscobia in December, you may recall I had some mild neuropathy; a slight numbness of the tips of my middle two fingers. I gave myself until January 19th, one week before the Arrowhead, for it to clear before making my decision on whether I was going to do the Arrowhead or not. 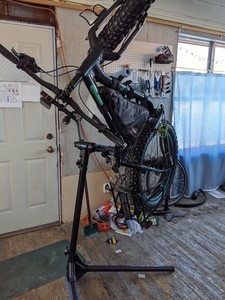 The week after Tuscobia, I took my Mukluk over to Paulie at Go Physio for a bike fit and to get some PT exercises for my fingers. Turns out at some point my saddle had wandered backward by almost 2cm, causing my position to change radically from my previous bike fit before the 2019 Arrowhead. A few other tweaks and a new stem later, and the bike should fit much better. I’m still considering extra padding and some custom parts to give me more cush and more hand positions inside my pogies.

On January 19th it had not gone away, which meant I was not racing the Arrowhead. Since I had failed to complete the Tuscobia, thereby botching my chance at an Order of the Hrimthurs this season, I at least had less incentive to go back on my earlier ultimatum.

As race day grew closer, the weather forecast looked more and more like the forecast we had for Tuscobia. The predicted high temperature kept increasing to just a few degrees below freezing and I was glad to not have to deal with that crap again.

But I already had a room booked and had paid the price of admission, so I decided to go north and at least pick up my t-shirt and goodie bag and have dinner with a bunch of bonkers people doing a bonkers thing.

Over the final week though, the forecast started trending cooler and looking much better. 20˚F with no rain seemed like nearly perfect conditions and I started itching to ride the trail. At the last moment, I decided to bring my bike and get out onto the trail the day before, then decide if I was going to be a DNF or DNS for this race. Since my fingertips were still numb, I wasn’t going to finish, but I might just start. 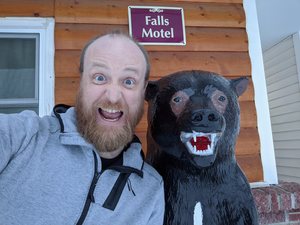 I arrived in International Falls to a balmy 26˚F, literally 72˚F warmer than the -46˚F the morning before the race last year. I was staying at the Falls Motel again, since it’s convenient to the starting line and reasonably affordable. My room was a little awkward for my bike, but at least it opened directly outside, so I didn’t have to deal with hallways or stairs, like I did at the Tuscobia.

At gear check (and online), I was encouraged multiple times to at least start the race, if nothing else to keep the finishing rate low. Some folks wanted me to disregard my neuropathy and ride to the end anyway, but I like my fingers and I had already made plans to leave for Minneapolis Monday afternoon. At this point, my plan to ride to checkpoint one and then drop was pretty well solidified. I just couldn’t stay off this trail. 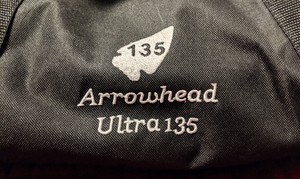 Note: The goodie bag was totally worth the 5-hour drive to International Falls. A little food, a great (still confusing to me) ¾ length t-shirt, and a snazzy black duffle with the Arrowhead Ultra 135 logo on it, among other things. I was super chuffed at the tube of official Arrowhead Winter Ultra lip balm which was just in time since my previous one is running out.

Sunday, before the race, I went out for a quick, two-hour ride on the Blue Ox/Arrowhead Trail to test conditions and tire pressure. The trail was mostly hard and fast but difficult to read. There was a shelf on the right edge that looked perfectly smooth, but it had a thin crust over the top that sucked Watts as my tires broke through it, and there were snowmobile-churned sections that were even worse. Sometimes the snowmobile tracks had a narrow strip of hard, easy trail and sometimes the hard, easy section was actually on that crust-covered shelf. This reinforced one of the things I learned at Tuscobia: I’d have to ride back and forth on the trail a few times to find the best line and if I ever thought my line wasn’t the best, I’d have to do it again. 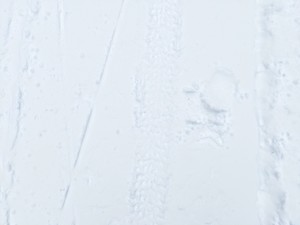 That night at dinner, I was chatting with a few other racers and realized that there is no support between the start and Gateway. Since that was as far as I was planning to ride, there was no difference between supported and unsupported. I checked with Race Director Ken and I had until the next morning to make a decision and announce it when I checked in at the starting line. 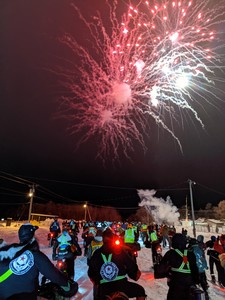 At 7:00 AM sharp(-ish) the fireworks went off and I got passed by most of the other riders while I put my phone away after taking pictures.

If anything, the trail was better this morning than yesterday. Since I am not a fast or strong rider and a I am a photographer I was well toward the back of the pack so the fat-tire-packed line was wide and solid. I averaged about 8 MPH up to the first turn where the Blue Ox and Arrowhead trails split at a small shelter. Last year, this was where I remembered I hadn’t eaten breakfast and pulled half-frozen chicken tenders out of my pocket. No need today, just a few small clothing adjustments and a photosphere and I was back on the trail. 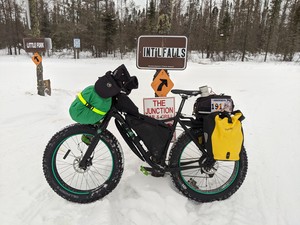 Thinking back to last year again, mile 13 was where everything started to get slow. The trail had more churn from snowmobiles and deeper snowdrifts causing me to lower my tire pressure to keep from washing out. This year, I couldn’t detect any change in the trail at all. Maybe it was my new Dillinger 5 tires having more float than my Dillinger 4s from last year. Maybe it was because my bike was packed much lighter. Maybe the trail just didn’t change. Whatever was causing it, I was glad for the continued speed and easy pedaling.

The trail stayed great all the way to the next shelter where there was, thankfully, an outhouse of sorts. Really, it was more of a box with a toilet seat inside. Looking down through the opening, there was a surprising amount of sunlight illuminating what could have been either snow or frozen toilet paper. I didn’t matter but I did consider the difference between peeing off the side of the trail and peeing under an elevated box was maybe not that significant.

My speed continued to stay high. I’m not sure I can trust the average reported by my Wahoo Elemnt Roam since it showed my max speed as 378.1 MPH, which seemed somewhat unlikely. I suspect there’s some interference between my Garmin InReach transmitting my information to space and my Wahoo trying to read GPS signals on a similar frequency. 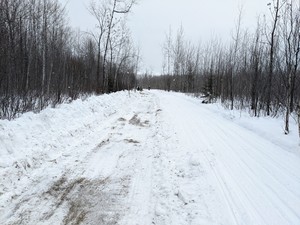 Judging by my speed though, it was somewhere around mile 31 where a construction crew had torn up half the trail to get their trucks through. That left the right-hand side for snowmobiles, which meant it was too chopped up to be stable for bikes. Where the trail had been plowed down to frozen dirt it was extra fast but where there were ruts and drifts it was extra sketchy. It was even more sketchy when a dozen snowmobiles were sitting “off the trail” in the plowed down section so they could all stare at some mechanical problem one of them had. I didn’t quite fall while moving over and I didn’t quite walk past them on the other side. 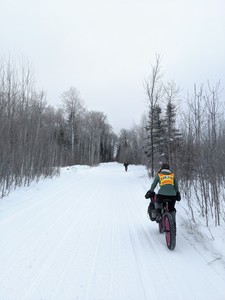 Once I got past the creek where a backhoe was installing new culvert, the trail returned to its prior awesomeness and my speed went back up. The hills just start to begin this side of checkpoint one, so I had a few fast descents and slow climbs. At one point, I must have hit a soft spot I wasn’t prepared for because I was suddenly under my bike on the side of the trail. Luckily, the waist-deep snow off the edge was very soft and the trees were very small. Any landing you can walk away from, right? Besides, it’s not an Arrowhead without a couple snow angels. 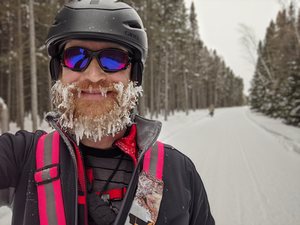 Just like last year, as I approached checkpoint one I wasn’t sure if I had somehow missed the turn. Even though I had a distinct mental image of what the turn looked like and no memory of passing anything like that, on a ride like this strange things happen. I needed to stop for a drink anyway, so I checked Google Maps. Less than a mile to go, of course.

I sped down the hill to checkpoint one at Gateway General Store and called out my bib number to the volunteer checking people in. Normally, as an unsupported racer, I would just turn around here and head back to the trail once I knew my number was in the books for this checkpoint, but I was dropping, so I continued on to tell the next volunteer. They all gave me a hard time about quitting at 35 miles, but I had accomplished my goal for the day and was ready to stop. Oddly, I felt as though I could continue unsupported to the end even though I would need to melt snow for water and eat all the solid food I had with me because I hadn’t packed as though I would ride without support.

On the drive home, I was super hungry and thirsty. I really hadn’t managed my nutrition well for those 5 hours and I lost a lot of exhaled water to my epic ice beard. Next year, I’ll plan this better, and maybe I’ll take home one of the “toughest of the tough” trophies for an unsupported finish. 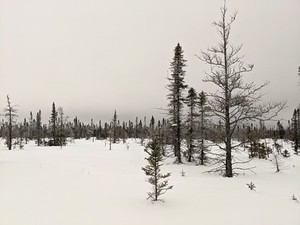